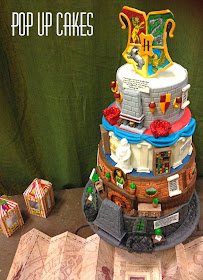 So I know it's been a while, like I said in the previous post. And even though I haven't technically made another cake, I realized that I have two cakes that I made a while ago but haven't posted yet. So here is one of them :-)!

My niece was in charge of a huge youth activity for 12-18 year olds at our church. And she decided that it would be awesome to have a cake for them that was appropriate for the theme.

The theme was Hogwarts (harry potter)!! and what a great activity it was! They divided them all up into the houses Gryffindor, Ravenclaw, Hufflepuff and Slytherine and had them go to different classes and earn house points. So naturally she wanted a cake where the houses were represented.

After A LOT of research into things that would represent the houses I decided to make 4 tiers and each tier would be the house common room. Here is my sketch: 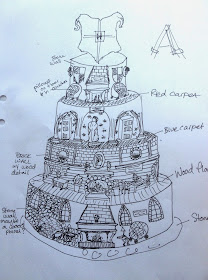 Here are some of the pictures from the "making of" ;-)! 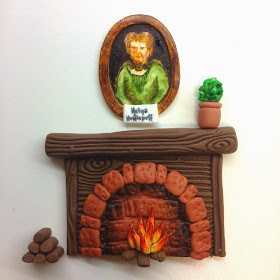 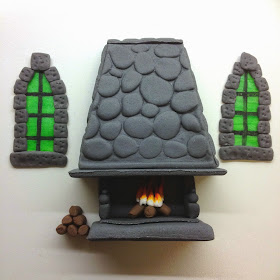 The cakes had two different fillings. Two of the tiers were Vanilla sponge with one layer a Vanilla Bavaroise and the other a Lemon curd Whipped Cream Cheese Frosting. The other two tiers were chocolate sponges filled with Vanilla Whipped cream cheese frosting and Salted Dulce de Leche.

The biggest success of the evening wasn't that everyone thought it was a lovely LOOKING cake, it was the fact that SOOoooo many came up to me to tell me how AMAZING it tasted. Some of them were even surprised as they all thought a cake like that (a fondant cake where so much effort had been made on the looks) never tastes good, but that it was one of the best cakes in general they had ever tasted. now THAT was success. There was over 100 people at the party. And I felt like I got a thumbs up from all of them. A success all in all!

Here are some more detail pictures. I have written underneath each picture which house it represents :-)! I have also added some extra info about each house from the research I did. Most of the research has been represented on the cake! 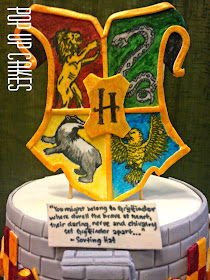 This is the Hogwarts crest that I hand painted with paste colors and a very fine brush. The Lion is for Gryffindor, the Snake is Slytherine, the Badger is Hufflepuff and the eagle is Ravenclaw.... But who am I kidding.. You guys know all this already ;-)!!! 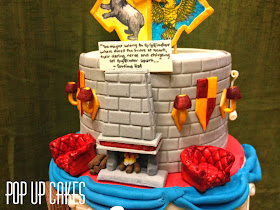 This is the Gryffindor common room. Their colors are red and gold. The quote on top of the fireplace says "You might belong to Gryffindor where dwell the brave at heart, their daring, nerve and chivalry set Gryffindor apart..." This is a quote from the sorting hat's song. In the book the sorting hat says it to harry potter as he is trying to decide which house to place him in.

The Gryffindor House is in one of the towers.

Some words that set the Gryffindor's appart are: 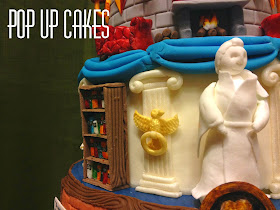 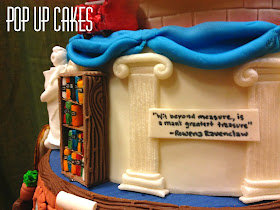 "Wit beyond measure, is a mans greatest treasure" - Rowena Ravenclaw (Founder of the Ravenclaw house). The Ravenclaws are the intellectual ones. It is quite interesting, in my research I found out that just like the sorting hat had issues of where to put Harry, it also had issues about Hermione, but with her it wanted to sort her into Ravenclaw because of her intellect.

The ravenclaw common room is also in a tower.

"Or yet in wise old Ravenclaw,
If you've a ready mind,
Where those of wit and learning,Will always find their kind."
-Sorting Hat

Some of the words to describe a Ravenclaw are: 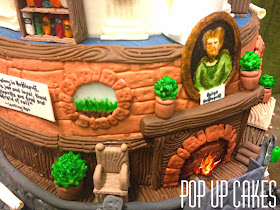 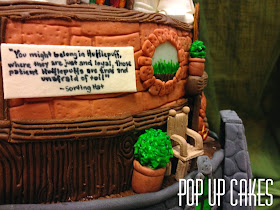 "You might belong in Hufflepuff, where they are just and loyal, those patient Hufflepuffs are true and unafraid of toil" - Sorting hat. The Hufflepuff common room is in the basement, but just high enough for there to be windows to see out over the lawn. It's supposed to be a very earthy place, with wooden details and a warm fire place with a picture of Helga Hufflepuff over it. Helga was the founder of the house.

Some of the words that represent Hufflepuff are: 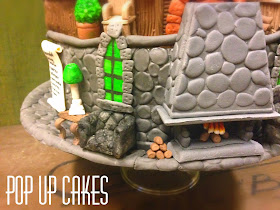 "Or perhaps in Slytherin, You'll make your real friends, Those cunning folk use any means, To achieve their ends." - Sorting Hat. This was my least favorite one. Mainly because I made a huge bobo on it... I used the wrong tin for the cake and instead of having one 28 cm for the bottom and one 24 cm for the one on top... instead I accidentally made 2x 24 cm!!! I had to shift the whole cake off it's center, making this cake have a DEFINITE front side... But hey, It's still presentable ;-)!

Some words to describe the Slytherines are:
I hope you enjoyed this in my eyes HUGE project! After this I said that I would wait a long time to make a project like this... only issue... the next week I had another cake to make :-)!!! 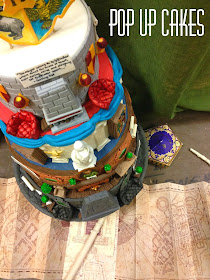 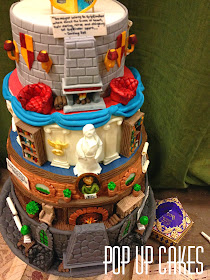